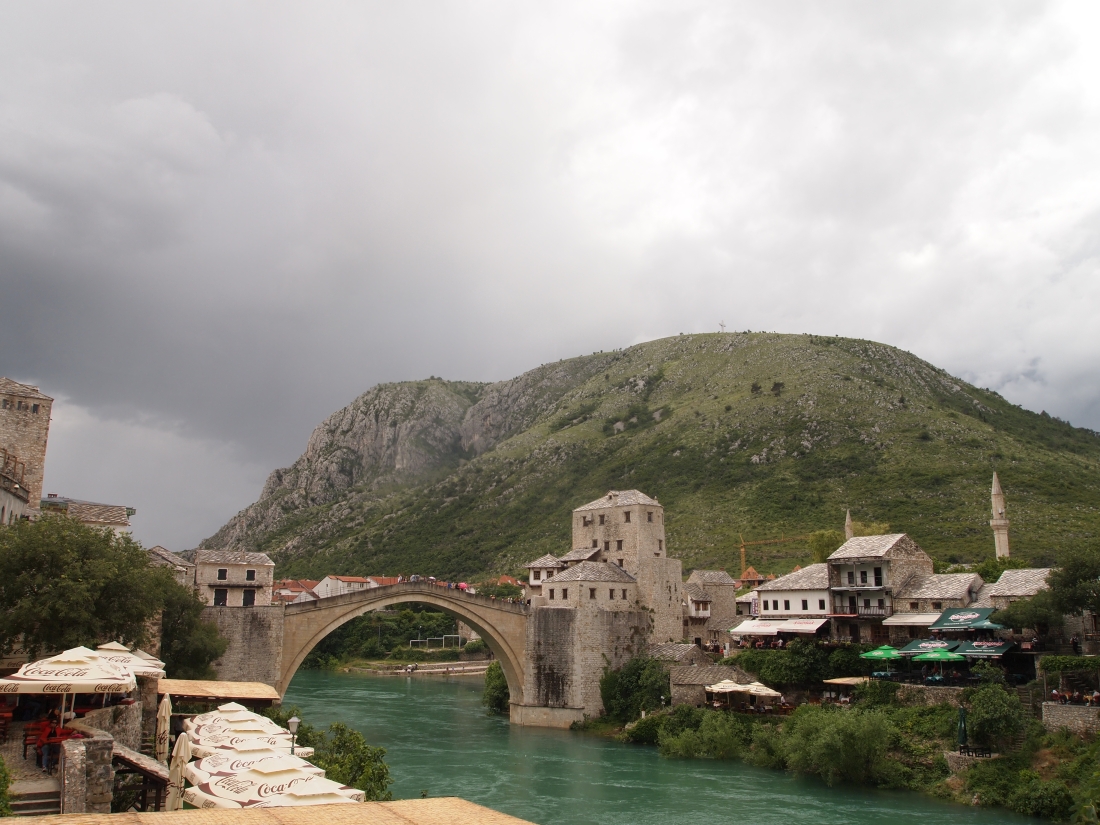 After spending a week in Bosnia and Herzegovina’s wealthier, more tourist-oriented neighbor and crossing a border that didn’t exist 18 years ago, I couldn’t put my finger on what I expected to find in BiH. It was doing well enough to accept buses full of gawking tourists on a daily basis, but, unsurprisingly, not well enough to warrant EU membership.

As we neared Mostar, the largest city in the Herzegovina region, the ethnic and religious diversity of the country — and reminders of all it had wrought in the past twenty years — were evident even from the highway. A yellow and black road sign flew by with one of its lines spray painted to oblivion. I automatically assumed (perhaps in true New Jersey style?) that there was construction in that direction, or that perhaps the exit number had changed…until I saw another sign like that. And another. Finally we passed a sign with all its lines visible; those that had been blacked out were written in Serbian, which uses the Cyrillic alphabet. Though Serbian is one of BiH’s official languages and road signs reflect this fact, Serbs are viewed by Bosniaks and and Bosnian Croats alike as perpetrators of the Yugoslav conflict. Though citizens of BiH and Croatia can agree on little, their hatred of Serbia is one concept that unites them.

As if on cue, our guide gave a superficial account of the Dayton Accords and the end of fighting in the region. “Though the leaders signed some documents, not everything is fixed in Bosnia.” She flippantly explained that Bosniaks, which is “the name Muslim Bosnians gave themselves,” and Croats still don’t get along. “Many refuse to even cross into the part of town where the other side lives… they’ll only do it if they really have to.” She warned us not to believe everything we heard from our local guide. “Sometimes they are biased and lie,” she added, as if she were free from such an affliction.

The cityscape of Mostar is dominated by several modest minarets and the tallest, ugliest Catholic bell tower I’ve ever seen. From the left bank of the aquamarine River Neretva, a massive concrete cross is visible on the top of Mount Hum, lording over the town below. Though the mosques are more numerous, the Catholic attractions in the city seem to be engaged in a game “Can You Top This — World Religions Edition.”

Despite the ethnic and religious tension still palpable as we entered the city, our local guide, a Mostar native, described the city as lacking a specific religious or ethnic identity, because it exists “for those who live there, no matter their background.” I wondered what our Croat guide would think of that.

Mostar seemed to embrace its diversity and history — even the recent, ugly stuff — in a way that Dubrovnik did not. It put uncomfortable topics at the forefront, perhaps because it can neither hide nor repair the war ruins that still dot the town. It needs to explain why pieces of the iconic Old Bridge, once a symbol of the town’s unity that was destroyed by Croat forces at the end of the war, are visible on the bed of the Neretva.

And so it styles itself as a land of contrasts and crossroads between East and West, Islam and Christianity, Communism and Capitalism, Good and Evil. And it does it through souvenir shops.

If you didn’t realize that war had touched Mostar before you arrived, you’d have no doubt once you saw the various trinkets made out of bonafide shell casings available for purchase.

You might not have known that Yugoslavia was a communist country — it cut ties with the Soviet Union, after all, so how communist could it actually be? Answer: as communist as jolly old Josip Tito, President of Yugoslavia.

And you’ll practically be an ethnographer after you peruse the offerings of a t-shirt shop in Mostar. Either that or you’ll think you’re in the Little Mostar section of some Jersey Shore boardwalk.

Bosnia and Herzegovina is undoubtedly still recovering from violent conflict nearly 20 years after the Dayton Accords, and relations between ethnic and religious groups remain strained. Even so, BiH, with its veritable melting pot of Balkan identities, seems to represent itself in a more truthful, self-aware way to those willing to hop on a minibus, cross three borders, and amble around the cobblestone streets of the crossroads of Mostar.